Published by Kimberly on May 3, 2012. Filed under Books 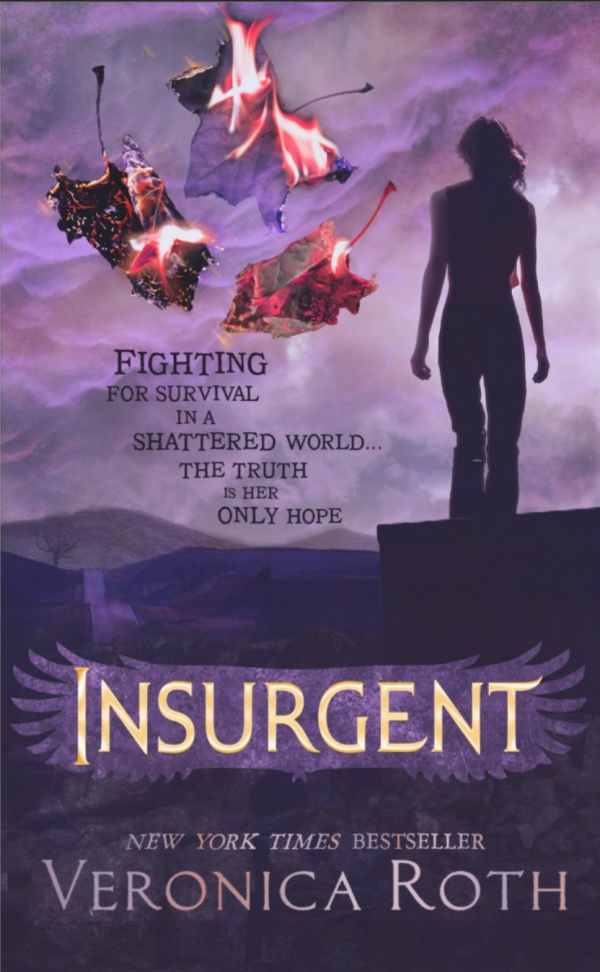 Wow! Just finished Insurgent. I cannot wait to hear everyone else’s responses. Lots of twists, turns, ups and downs. Some things I am happy with, some things not.

Below you will not find a review as much as a compilation of my thoughts.

CAUTION: If you continue, you WILL BE SPOILED!

Maybe I was tired when I read Insurgent. I downloaded it at 10:00 PM the night before the book released (thank goodness for my kindle!) and read until 2:30 AM and then most of the next day. I have to say that I am a little disappointed with Insurgent. Not because of what Veronica Roth wrote, but maybe what she didn’t. The Tris of Insurgent is not the underdog of Divergent we were cheering for. She is the “day after” Dauntless. She is grief-stricken. All the adrenaline that coursed through her veins in order to stop the simulation and get Tobias safe has now withered and what remains are the memories, guilt and self-reproach for her actions. This Tris is tired, wounded, raw, numb…haunted…and there is no safe place for her to hole up and heal.

The Tobias of Insurgent had his own demons to battle. Where we relished in his strength in Divergent, we see more of his brokenness in Insurgent. He is laid bare at a particularly merciless Candor testing and his resulting pain is at times palpable. Also, with the attack on Abnegation, Marcus, Tobias’ father and former abuser travels with them for a time making his nightmare landscape an inescapable one of reality. Even in the midst of his fears, he acts nobly and attempts to make wise decisions. Instead of sitting back and criticizing the factions, he decides to become a part of a solution. He meets up with another frightening aspect of his childhood for whom Tris rightfully doesn’t trust. This individual encourages/manipulates him to become something important. We see Tobias get seduced into helping support another movement, even for the apparent “right” reasons. But the lesson has yet to be learned. There are no right reasons in this world and Tris is correct to distrust any group she describes as “one who speaks so casually about demolishing an entire faction.”

Hurting people hurt people. Tobias tells Tris he loves her, but she is numb. Or her senses has been so overloaded that she is incapable of discerning her feelings. She behaves at times erratically which I am sure lends itself to Tobias not trusting her. She lies, betrays and repeatedly pushes him away. She behaves, well, like the sixteen year old she is! Her feelings are understandable, but so is his response.

By the time Tris betrays Tobias and joins Marcus, I had had it and was yelling REALLY??? ANOTHER secret Tris is keeping from Tobias and she has to be involved in yet one more death-defying altercation? *sigh* By this point I think I was becoming weary from all the skirmishes without clear purpose. At some point, I became confused by all the factions, not just keeping their names straight, but who was truly good and who their enemy was. And because this wasn’t clear to me, I had to agree with Tobias in questioning why Tris needed to involve herself. He hit the nail on the head when he accuses her of falling into a Dauntless trap, in seeking out adrenaline like a junky seeks a hit. He sees her on a path of self-destruction and says he cannot support it. He says he loves the Divergent Tris who makes decisions apart from factions. And yet, that sentiment is to be challenged as well.

People, I have discovered, are layers and layers of secrets. You believe you know them, that you understand them, but their motives are always hidden from you, buried in their own hearts. You will never know them, but sometimes you decide to trust them.

Overall, even though the relationship between Tris and Tobias was “kept real,” I wish there were more “together” moments without them feeling they needed to hide things from each other. I was reminded of them climbing the Ferris Wheel in Divergent with her stretching into her fearlessness and him at her back. I felt her ache with his absence. I was encouraged that even through all the happenings of the book, by the end Tris was able to say “…Tobias is stubborn and proud–but he is mine.” I was equally hopeful in that Tobias made the choice to back her and trust her instincts once again.

On the brighter side, I was really happy with the relational in-roads with Christina and Cara. Tris’s raw emotions really needed the balm of forgiveness and I felt by the end that she feels less isolated in her grief. Also, Christina is such a good friend for Tris. When Christina puts make-up on Tris when they were going to Amity, I felt that it was a bit of nurturing that Tris so desperately needed in the loss of her mother. I was even happy with some of the decisions that Peter made. Even though I don’t agree with his position or the reasons he chose to justify his actions, I was glad he chose to do the right thing. I don’t envy him having to live in this new world looking over his shoulder for Edward. I guess the price for his Dauntless behavior is still following him as well.

I was heartbroken for Tris with the things she discovered about Caleb. In the end, I am not sure where things were left off with him or with Marcus for that matter. I think Tobias’s mother is pretty darn scary and not much better than Jeanine. And she was NOT nice to Tris. And the worst part is that Tobias didn’t see it. Grrr!

Okay…the ending. WTH??? They kept everyone sequestered from the population to sort of “reboot” society? I guess to create Divergent populations was the goal. What do they do now?Apparently, the woman speaking was a relative of Tris’s. At one point during the Candor truth-testing, Tris informs us that when a couple marry, one spouse has to take the other’s surname. We don’t know if Edith Prior is from Tris’ mother’s side or father’s. One more teeny question,Tris’ mother was raised Dauntless, right? What happened to her Dauntless parents??

Overall, even though I was secretly wishing for more intimacy and for characters in stronger places, this wasn’t the book for that. Insurgent is about strong characters who have been under duress and were being tested in their weakness. Roth does a masterful job of building a world and at the same time destroying any pre-conceived ideals. In true Candor fashion, she smacks you in the face with the truth. That there are no truly good or evil factions, but varying shades of both. The lesson Tris has learned throughout this book is culminated in Edith’s message. That the battle she is waging is not against a particular faction, “but against human nature itself.”

No Responses to “*Spoiler Alert* Review of Insurgent by Veronica Roth”